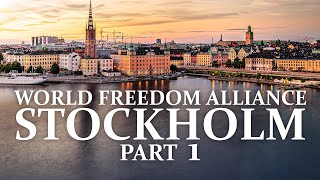 The World Freedom Alliance will provide a worldwide platform linking with various associations and organisations offering access to justice, true dialogue for health science and politics while holding worldwide officials to account under the law. We will offer transparent evidence-based solutions and encourage robust debate with media, scientists and governments to ensure our fundamental freedoms of the people of the world are restored and maintained.

Fredy Perlman: against the system

A brand new profile has now gone live on the Organic Radicals site, looking at Fredy Perlman, who died in 1985 at the age of 50. The anarchist author and publisher, co-founder of Black & Red Books in Detroit, USA, fiercely and eloquently condemned the modern system of artifice, destruction and exploitation. “The Progress of […]

Forty-five years ago, dissident French thinker Jacques Ellul wrote about all the contradictions and difficulties involved in maintaining what he called the “scientific-state-techno-economical complex”. Looking ahead, he wondered out loud how it could ever be kept functioning and expanding in the future. He concluded, with foresight which seems uncanny in the 2020s: “In truth, there […]

by Paul Cudenec One of the most sickening aspects of the Covid scam has been the fanatical support for the operation from the entity that calls itself “the left”. I have been writing about this since April 2020 and there are various articles on the Winter Oak site seeking to discover exactly why “official” left/anarchist positions align so closely […] […]